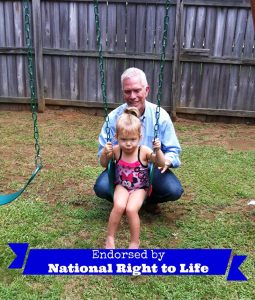 As a proud father of four and grandfather of six, Bill Johnson is strongly pro-life, and believes that life begins at conception.

Bill is committed to protecting the lives of the unborn, and preventing tax dollars from being given to abortion providers, like Planned Parenthood.  Johnson has a 100% pro-life voting record, and is a co-sponsor of several bills to protect life, including: H.R. 305, the Sanctity of Human Life Act, H.R. 490, the Heartbeat Protection Act, H.R. 20, the No Taxpayer Funding for Abortion Act, H.R. 369, the Defund Planned Parenthood Act, and H.R. 2014, the Conscience Protection Act.

Bill is a member of the House of Representatives’ Pro-Life Caucus.