Bill Johnson believes Ohio is a leader in America’s drive toward energy independence.  He believes we have a tremendous opportunity here in Ohio to create thousands of jobs, and lead America on a path toward energy dominance with our massive coal reserves and the Utica and Marcellus shale deposits with their huge reserves of natural gas and oil.  The abundant natural gas liquids within these shale deposits present tremendous new job and manufacturing opportunities for our region, as ethane crackers are built, and the necessary supporting infrastructure is created. Johnson, a member of the powerful House Energy & Commerce Committee, is a leading voice in support of the environmentally responsible development and use of coal, oil, and natural gas. For too long, we relied on unstable Middle Eastern nations for our energy. Those days are gone…we are now energy independent!

Bill is also leading the effort to remove Washington barriers that will enable us to continue responsibly developing our coal, oil and natural gas resources, creating thousands of jobs in the process.  On coal, Bill authored the second piece of legislation that President Trump signed into law upon entering the White House that eliminated one of the primary pillars of former President Obama’s ‘War on Coal.’  On the oil and gas front, Johnson has introuced legislation called, H.R. 7404, The Unlocking our Domestic LNG Potential Act that would allow America to prosper economically and create jobs here at home by efficiently exporting our excess natural gas to our allies in Europe and Asia – our friends who have, for too long, been under the thumb of Vladimir Putin’s Russia to meet their energy needs. With trillions of cubic feet of recoverable natural gas beneath our feet, the U.S. is currently the world’s largest producer of natural gas. America should be doing all we can to take advantage of this abundant resource, especially as these exports will help create thousands of jobs here at home, and provide billions of dollars in increased wage-earning potential for American workers.

In order to achieve energy dominance, we must move full-speed ahead on domestic oil and natural gas development and coal production, but the future of the United States depends on an all-of-the-above energy strategy that includes advanced nuclear technology, and Johnson has introduced legislation, H.R. 7405, The Strengthening American Nuclear Competitiveness Act to further that objective.  It is important that America retains its technological leadership in civilian nuclear technology, and Bill has worked to reduce barriers to allow innovative American companies to export their technology overseas to our allies, because if we don’t lead, Russia and China will be glad to step in to pick up the slack.

However, we must be clear-eyed that there is an unprecedented war on cheap and abundant fossil fuel energy. The radical “Green New Deal” faction of the Democrat Party is gaining steam, and their advocates are becoming more organized and emboldened.  Bill is using his platform on the House Energy and Commerce Committee to fight back against these reckless policies. 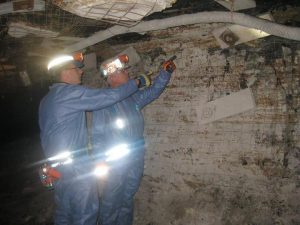 America has significant energy resources, and if Washington would get out of the way and let the private market drive energy innovations, we would learn to produce, store, distribute, and use energy in ways we’ve never imagined…it’s called “American Exceptionalism”.

In order to achieve energy dominance, we must move full speed ahead on domestic oil and natural gas development and coal production, but we also must begin expanding our nuclear footprint and determine what role market-driven innovations in wind and solar power and other renewable technologies will play in that equation. America has significant energy resources, and if Washington would get out of the way and let the private market drive energy innovations, we would learn to produce, store, distribute, and use energy in ways we’ve never imagined…it’s called “American Exceptionalism”.