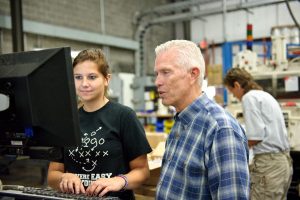 Bill Johnson believes for America to compete in the economy of the future, rural broadband must be an integral component. It’s time to work together — at the federal, state, and local levels — to ensure: our children have the technology and tools they need at home to further their education; businesses have the high-speed internet connectivity they need to effectively compete, succeed, create jobs, and provide opportunities for the hardworking people that live here; patients have access to the emerging field of telemedicine; and, we all have the ability to take advantage of “being connected.”

High-speed connectivity is no longer a luxury – it is essential for everyday activities in today’s highly technical, information-driven, digital world. COVID-19 didn’t cause it, but has certainly exposed the urban-rural digital divide and the dire need for broadband access in rural America.

Johnson believes that the Federal Communications Commission’s (FCC) Rural Digital Opportunity Fund (RDOF), which will provide $20.4 billion for rural broadband deployment, is a tremendous opportunity for rural America and, if done correctly, has great potential to help close the digital divide. Bill has worked closely with stakeholders and providers in Eastern and Southeastern Ohio to ensure they have all the information they need to successfully participate in the upcoming RDOF auction.

As a member of the U.S. House Subcommittee on Communications and Technology, Bill is leading the charge for a further rollout of broadband internet access in rural areas. Far too many rural communities, particularly those in Appalachia, have been left behind – we must bridge the urban-rural digital divide now. He’s also authored numerous pieces of legislation to further broadband expansion. This Congress, Bill introduced H.R. 7357, The Wireless Broadband Competition and Efficient Deployment Act, which would declare that collocations of wireless facilities are a category of activities to be excluded from the requirement to prepare an environmental or history preservation review. This would eliminate burdensome reviews that are often repetitive and unnecessarily show down broadband expansion. He also introduced legislation called The Broadband Adoption and Opportunity Act, which would leverage public-private partnerships through a 5-year pilot program to refurbish internet-capable devices for students and underserved families through donation, lending, or low-cost purchasing programs.

Johnson is also a sponsor of H.R. 6456, The Serving Rural America Act, which would create a pilot grant program through the FCC for rural broadband deployment, authorizing $500 million. This bill would require internet service providers to partner with a locality, city, county, wireless authority, or planning district commission to ensure that the needs and input of residents are included.

Bill’s held numerous broadband internet access roundtables across Eastern and Southeastern Ohio focused specifically on this issue, brought commissioners from the FCC to the area, and it’s an issue he has been talking about for some time. Too many bureaucrats in Washington simply don’t understand the various challenges we here in Eastern and Southeastern Ohio face. We will not be left behind anymore. There’s a wealth of intellectual capital here in rural Appalachia…and, America needs to start tapping into it. If we don’t solve this problem very soon, there won’t be a problem left to solve…because people will move away to areas that do have reliable, high-speed broadband.